To start of the week, here are the hamsas I made for the February Polymer Clay Adventure swap. I’m happy to say they reached their destination safe and sound! I made a peacock based on this super fun tutorial from Christi Friesen and paired it with a silkscreened one that has a peacock feather pattern. I’m so in love with this silkscreen from Tonja’s Treasures. I have some ideas brewing for projects that will incorporate these silkscreens. 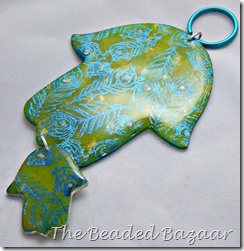 The elephant head was molded based on this excellent journal cover tutorial and was paired with a keychain that had a bunch of smaller silkscreened hamsas. 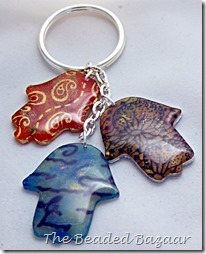 Finally, I really wanted to do a phoenix for the third one, but couldn’t get the shape of the bird to look right. And this one was to go to Katie of KatersAcres, who’s an AMAZING sculptor (and all round artist really). So I abandoned the attempt at sculpting and went with a millifeori style hamsa, along with a parrot patterned silkscreen.

All in all sculpting was fun! I still need precise instructions to follow; my experiments with the phoenix sadly proved that I’m not a natural sculptor. But it was still a lot more fun that I’d thought. I’ll definitely be doing more of that. Also, here are the lovely pieces I received in the hamsa swap!

I spent the last couple of weeks scrambling to finish up some March swap pieces. I talked about butterflies last week, here’s a GIANT faux cloisonne butterfly. While I liked how it turned out, it’s far too large to be used as anything but a wall hanging! I tried coming up with a smaller version, but apparently I just can’t draw small! So I shelved the idea and went with a bunch of other pieces including a butterfly wing cane, faux mosaic and a fair attempt at soutache. No pictures yet, since I just mailed the package out today. So tune in next week if you’re curious!

I’m also planning my first ever fairy door for the second Parker’s clay tribe challenge. This time around, only one entry is allowed per person, so I spent some time thinking about different designs. After some research on different elaborate doors, I have a design sketched out and some test prototype pieces. I’m not going to give away anything else, except that this peacock cane will contribute heavily to the door! 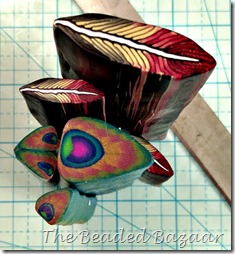 Also in the works, some more feather canes for my owl swap. I’m planning on some sculpted owl pendants, so I have several more canes to make and reduce. This is a three for three swap, similar to the hamsas, so I need to work on swaps for three people. I had a plan in place, and was making progress nicely. But of course now that I’m close to the deadline for finishing them, I’m not happy with just one technique or one style! The good news is I’m close to finished with my initial plan, so I should have something to mail of next week! But till we get there, I’m off to go make about a billion skinner blend sheets!

One thought on “The hamsa swap”